Sea World came to San Antonio (where I grew up) in 1989.  I was a junior in high school and beyond excited.  I was determined to work there.  I just had to be a part of it.

I spent days and weeks on my breaks between classes, after school, before track practice putting quarters into the pay phone trying to get through the job hotline.  To no avail.  I could never get through and I didn’t get a job – just like the other half of San Antonio didn’t get a job at Sea World that summer either.

But the next summer I did!

And the morning after my high school graduation, I showed up, donned the uniform and reported for work.

I worked the front gate department.  We sold tickets, staffed the gates, and processed annual passes.  It was a great job!  David Robinson came through my turnstile one day!  The Admiral, from The Spurs.  We were outside most of the time, greeting happy people and bidding them farewell after a day spent with Shamu.

The job had some great perks too.   Each employee got ten annual passes to give to family, 10 day passes, an opportunity to shop after the season where we could get Sea World paraphernalia for a fraction of what the public paid.  But by far, the best perk was the ability to go back into the park, after our shift and watch any of the shows we wanted.

And that’s what we did.  Since many times, my shift would include ticket sales or staffing the front gate and we closed these areas with a couple of hours left in the day,  I was able to leave my post, change out of my uniform and catch the final Shamu show.

This show was amazing.  While all of the other shows throughout the day were talking and showcasing the trainers with the whales, the final show of each night was called Shamu’s Playtime.  It was about thirty minutes of just Shamu playing – jumping, splashing, spinning, waving.  They played rock music and dimmed the lights.  For a land-locked girl, it was heaven.  It was like Shamu was performing just for me.  I was in love!

Another perk about working at Sea World was the Shamu cards and stickers.  This was a reward system in which supervisors could give a Shamu sticker when they felt a good job had been done.  These stickers were placed on a card.  Once the card reached five stickers, it was entered into a drawing to be held at the end of the season employee party.  The prizes for having your card picked ranged from t-shirts, cups, stuffed whales and the grand prize was a Toyota 4×4 truck.

I think I won a t-shirt.

The end of the season party was the best.  Not only did they open the park just for the employees….the finale was going to Shamu Stadium and watching the big whales play for what seemed like forever.  It was Shamu’s Playtime on extended mix.  It was amazing, an experience I will never forget.

I only worked at Sea World for the one summer.  It was a seasonal job and I was heading to college.

Jump ahead a few years and I’m waiting tables at a Chili’s.  One night, at one of my tables was a young couple talking about a trip to Seattle from which they had just returned.  I was engaged at the time to my now husband and he was stationed in the Navy up the Seattle area.  I mentioned this to the couple and told them that I would be moving to Seattle in a few weeks.  I was nervous about the move and having only been up to visit once prior, their stories were positive and encouraging.  And when they told me – “you have to go on a whale watching tour”, all my doubts faded. 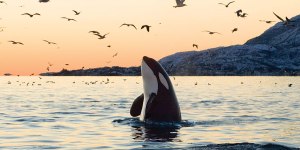 It would be a few years after I moved up to Washington before I went on my first whale watching tour.  And when I did, it was more amazing than I could have realized.  To see these amazing creatures, in the wild, moving so fast.  They were so huge and so strong.  I was in love all over again.

…whales in my town

I’m very lucky to live where the whales live.  Just this past summer, a few whales came to visit my small town, chasing seals in our bay. They are with us always.  We have two pods that are here all the time and then we have migrating pods that drift in and out.  The chance is seeing a whale in our waters on any given day is highly likely.  I think we’ve taken anyone who has visited us on a whale watching tour and no one has been disappointed.

I was on the fence as to whether or not I’d want to see it; but I’m glad I did.  Over the last few years, I’ve been having mixed feelings about Orcas living in captivity.  The longer I’ve lived with them, and read about them and gotten to know about them, the more I feel environments like Sea World are not a good idea.

And I won’t be visiting the whales in captivity anymore.

I encourage you to watch this movie, if for nothing else, to learn more about the whales.  It’s a hard movie to watch…the first 20 minutes were the hardest for me.  I’d love to know your thoughts.

4 thoughts on “When you know better…do better”